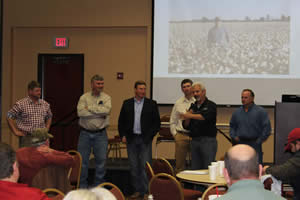 The Missouri Delta Soil Health Alliance, along with the Stoddard County NRCS and SWCD office, hosted their second annual soil health clinic on December 10, 2015 at the Minor Convention Center in Sikeston, MO.  There were 175 in attendance for the day-long event .  This year’s meeting was very informational for attendees whether they were already using cover crops or just considering adding it to their rotations.  The keynote speaker  was a leading national speaker on cover crops from North Carolina, Ray Archuletta.   He has worked in state’s coast to coast teaching soil health and the principles of agroecology throughout the country.

Also speaking at this year’s conference were Doug Peterson and Mike Plummer.  They added valuable information for attendees on the basics of what cover crops can do for the soil health of the acres they farm.  The five member producer panel from the area each had a slide show and/or video portraying the progression of their operations this past year.  Each member of the panel focused on a different crop in their rotation including corn, popcorn, soybeans, rice and cotton .

Plans are already being made for a field day to be held on March 17, 2016 and the third annual clinic to be held next December.  For more information you can contact the Stoddard County NRCS/SWCD office at (573) 624-5939 ext 3 or use the following social media:

On May 7th, the Missouri Extension hosted a safety day with the help of the Stoddard County SWCD and the SEMO Ag Leaders Young Farmer chapter. Read more about the event on the event pictures page.

Despite the rainy day, close to one hundred people gathered to learn more about cover crops.  We visited the farms of Johnny Hunter, Keith Mayberry in Stoddard County and Peter Rost in New Madrid County.  The cover crops that were planted were various mixtures and the previous crops were corn, beans and row rice.  Othere speakers were Jerry Kaiser from NRCS, Tim Kavan from MDC and AJ Foster from Missouri Extension.  There was an infiltration demonstration given when we gathered near New Madrid for lunch..